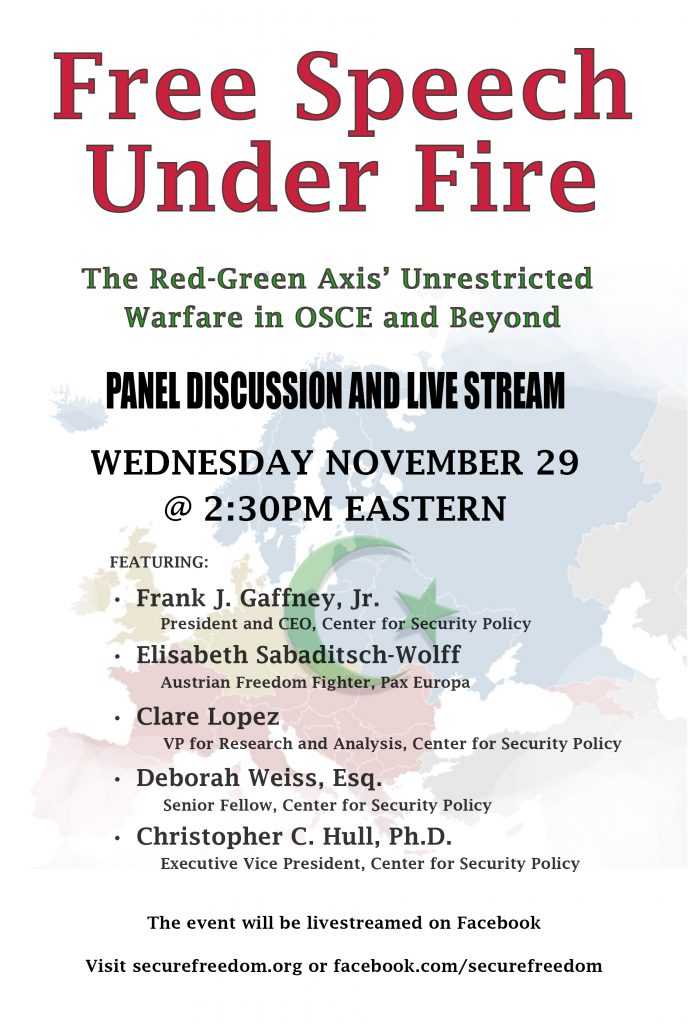 1st Amendment “not the right to NOT be offended”

Free speech is under attack across the Western world

Sharia: It can happen here

“Islamophobia” is “knowing the truth about Islam”

Why the OSCE is important to Americans

Free speech in the West is under fire.

It seems that every day, from every direction, the enemies of freedom encroach more upon what our Founders rightly described as a God-given and inalienable right.

We see “snowflakes” on college campuses shouting down or even attacking speakers with whom they disagree.

We see the politically correct mainstream media exploding in outrage over every utterance of President Donald J. Trump that does not conform to their standards.

We see politicians too mealy-mouthed to tell the truth – especially when it comes to the brutal, totalitarian Islamic ideology known as Sharia – lest they be subjected to charges of the wholly made up and phony syndrome dubbed “Islamophobia.”

We see social media giants stamping out the speech of those with whom they disagree, while they allow the speech of jihadis to flourish.

We see international organizations, from the United Nations to the Organization of Islamic Cooperation to the little-known Organization for Security and Cooperation in Europe (OSCE), each working in its own, insidious way to strangle expression.

And from all these quarters, we hear warnings about the ostensibly burgeoning danger of “hate speech.”

But what is hate speech, exactly?

More and more, it appears it is simply shorthand for depicting – and curbing – whatever expression the radical Left and Sharia-supremacists may find objectionable. Anything with which they disagree is dubbed “hate” and must be terminated.

In short, this “Red-Green Axis” – i.e., the collusion between neo-Marxist and Islamist forces against America and the West – works systematically to punish speech to which such partisans take offense, a category that seemingly expands with each passing day.

This Occasional Paper is the latest in a series of products addressing such subjects to be published by the Center for Security Policy Press, including:

Free Speech Under Fire provides a further examination of the unrestricted warfare now being mounted in forums like the Organization for Security and Cooperation in Europe that is inexorably garrotting free peoples’ ability to speak. It includes:

Taken together, these essays validate the proposition that the Red-Green Axis’ dark machinations amount to “unrestricted warfare” against free expression. That term was featured by two colonels in the People’s Liberation Army in their 1999 book, Unrestricted Warfare: China’s Master Plan to Destroy America. Translated from original PLA documents, this volume describes how “American military doctrine is typically led by technology; a new class of weapon or vehicle is developed, which allows or encourages an adjustment in strategy.”[4]

The authors, Chinese military strategists Qiao Liang and Wang Xiangsui “argue that this dynamic is a crucial weakness in the American military, and that this blind spot with regard to alternative forms of warfare could be effectively exploited by enemies” – a point not lost on the West’s alt-Left and its Islamic infiltrators as well.

Unrestricted Warfare teaches that the front lines can be almost anywhere.

It has become increasingly obvious that the front lines of the unrestricted war on free speech are on university campuses, where enemy-planted radical thought and rhetorical excess thrive.

The front lines are in newsrooms, long populated by not only totalitarians’ useful idiots, but active agents as well.

The front lines are on Facebook, Google, YouTube and Twitter as they crack down on conservative and counter-jihad speech, while allowing not only Russian influence operations, but jihadist propaganda and incitement, as well.

And the front lines are certainly at multilateral forums like the OSCE, where Sharia-supremacists work hand-in-hand with globalists to advance their common aim of centralizing and exercising control over both the means and the content of communications.

American policymakers and citizens alike must stand firm in the face of the relentless assault currently being mounted on the foundational freedom of speech that is described in the pages that follow.

It’s time to challenge the Left’s selective indignation about “hate speech” that gives a pass to Black Lives Matter, Antifa and many jihadists’ incitement of violence.

It’s time to take on the Sharia-supremacists who condemn as “Islamophobia” what, in reality, is simply truthful renderings of their anti-freedom political, military and legal system really means knowing too much about Sharia, and saying it aloud.

And it’s past time we reined in international organizations including by refusing to submit to their boa-like constriction of free speech.

We at the Center for Security Policy hope that you will stand with us – and stand up for free speech.