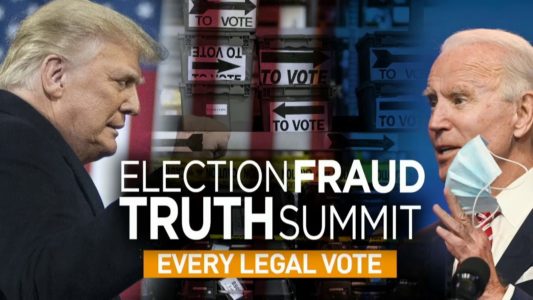 More than 100,000 viewers watched the show live and both The Economic War Room and the Every Legal Vote Coalition received immediate positive feedback on social media:

“Exceptional, up-to-date show! Honestly, the best info I’ve seen in one place. If anyone has questions about “Where’s the evidence?” “What are the legal options?” this is the show to watch. Great, great, great piece. Guests were powerful and covered the subjects perfectly. Congrats”  – Election Truth Summit Viewer

Attorneys Joe diGenova from the Trump Legal Team and one of the Center for Security Policy’s longtime friends, Jacki Deason, discussed revelations from the fraud investigations underway in states such as Georgia.

Another friend of the Center, Colonel John Mills, Former Director, Cybersecurity Policy, Strategy, and International Affairs, Office of the Secretary of Defense, joined the program to discuss Chinese interference in the United States, and in particular in the 2020 election.

Dr. Sean Lin, a friend of the Center and member of the Committee on the Present Danger China,  provided video footage of Chinese-based companies printing fake ballots for the November 3, 2020 election as well as damning video footage of remarks by Di Dongsheng, associate dean, School of International Relations at Renmin University of China on Nov 28, 2020 in Shanghai on a Chinese television program.  Mr. Dongsheng stated “we have people at the top…” and “…who helped Biden’s son build his global companies? You understand? There are indeed buy-and-sell transactions involved in here…”

Additional friends of the Center, such as cybersecurity and analytical experts like Rod Martin, Russ Ramsland, and Retired U.S. Army Colonel Phil Waldron, also joined to explain the profound impact of the electronic fraud and to debunk the numerous claims by media censors who try to argue that it did not take place.

Toward the end of the program, former inspector general of the United States Department of Defense, Joe Schmitz, joined to discuss the groundbreaking news that the Texas Attorney General Ken Paxton had just filed a motion to the Supreme Court against Georgia, Michigan, Pennsylvania and Wisconsin because of their suspected violations of the Electors Clause of the Constitution due to the their unconstitutional changes in voting rules or procedures. President Trump has stated that he will intervene in the Texas SCOTUS Election Case and Attorneys general for Arkansas, Alabama, Missouri, and Louisiana have issued statements in support of the motion.

The show ended with a challenge to viewers to visit the Every Legal Vote website and to use the “Take Action” link to email those who have a duty to investigate election fraud and prosecute those who commit it.  In the first 20 minutes after the show, more than 30,000 had done just that.