Erdogan’s authorization of the Turkish military’s incursion into northeast Syria has been a disaster to U.S. foreign and security interests in the fight against ISIS. Following the incursion, roughly 1,000 ISIS fighters and their relatives escaped prisons and the al-Hawl detention camp. Despite al-Bagdahdi’s death, ISIS could re-gain thousands of followers to plan and execute attacks in the region and on Western soil. Multiple cells, located in the Middle East, setup for planning attacks on western soil have been destroyed by the U.S. and its allies, this is why the fight against Islamists in the region remains utterly important.

Before the negotiated ceasefire on October 17th, Turkey’s military incursion displaced about 130,000 people. The Turkish military attacked the Kurds who have been the prime forces along with the U.S. in fighting against ISIS and bringing relative peace to the area. Turkish backed forces and the Free Syrian Army (FSA) have been ethnically cleansing Syria at the bidding of the Turks. Prior to the ceasefire, the FSA have attacked U.S. troops in northeast Syria. Post ceasefire, the FSA continue to ambush the Kurds and wreak havoc in northeast Syria. As part of the ceasefire agreement with the U.S., the Turkish government has been allowed to create a ‘safe zone’. The safe zone, which will be unilaterally controlled by the Turkish government, will further allow Turkey to aid and transport jihadists and weapons into Syria, shielding its conspicuous operations from the international community.

Erdogan’s recent actions can be explained by his ideology.

Turkish President Erdogan’s political party, the Justice and Development Party (AKP), is an offshoot of the Muslim Brotherhood. The Center for Security Policy published a Team B II report in a book titled, ‘Shariah: The Threat to America.’ The Muslim Brotherhood was founded in 1928 in Egypt by Hassan al Banna with the objective of spreading the Islamic principles of sharia law to the rest of the world and the creating a caliphate.

Since the Turkish elections of 2007, where the AKP gained substantial political control in Turkey, the party’s ideology became aligned with that of the Muslim Brotherhood. The AKP became increasingly Anti-Israel and sought to increase its influence in the Middle East. Erdogan’s government has supported and aided thousands of jihadists, most especially those crossing into Syria via Turkey. Jihadi fighters wounded in war in Syria have also sought to get medical treatment across the border in Turkey.

In central Turkey, the AKP have displayed troubling messages on bill boards which display a bloodied cross and star of David, followed by Koranic verse 5:51:

“O you who believe! Take not the Jews and the Christians as Auliya’ (friends, protectors, helpers, etc.), they are but Auliya’ to one another. And if any amongst you takes them as Auliya’, then surely he is one of them. Verily, Allah guides not those people who are the Zalimun” (polytheists and wrong­doers and unjust). 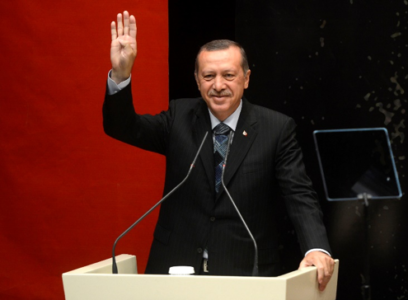 The AKP has also sought close ties to the Palestinian terror group Hamas, hosting its members in Ankara in 2006. Erdogan has sought to make Hamas and the Palestinian territory legitimate and continues to do so till today. Therefore, it is no surprise that Hamas endorsed Turkey’s offensive in northeast Syria; Turkey’s ‘Operation Peace Spring’ was ironically an operation aimed at ethnically cleansing the Kurdish people and alleviating ISIS fighters held in Kurdish prisons. Hamas fighters also receive arms and training from SADAT, a private Turkish defense contractor.

Erdogan will continue to further his Islamist ambitions, form stronger alliances with the U.S. and western adversaries such as Iran and Russia, and fight to recreate the Ottoman Empire. Moreover, Erdogan sees himself as a Caliph and the leader of all Muslims around the world. Erdogan and his supporters believe that Sunni Islam is the right Islam and will fight to force it on the people of Turkey and the rest of the world. To retain power, Erdogan’s government continues to unjustly prosecute those who criticize he and his government’s actions.