Nearly two-thirds of Americans believe that the Chinese regime should pay reparations for the destruction caused by the human coronavirus pandemic, according to a TIPP Poll conducted for the Center for Security Policy.

That number rises from 63 percent to 78 percent if investigations reveal that the Chinese government released the SARS-CoV-19 human coronavirus on purpose.

While southerners and Midwesterners are most likely to think that the Chinese government created the virus and is responsible for unleashing the pandemic, people in the more liberal Northeast are the toughest when it comes to making China pay reparations if an investigation reveals an accidental release from a government lab.

These are astonishing numbers. They reveal a powerful narrowing of the gap since the pandemic began a year and a half ago. The American people are taking an increasingly hard line toward the Chinese regime.

The Center’s poll results generally coincide with the numbers of a new Politico-Harvard poll, which shows that 52 percent of the public believes that the virus that causes COVID-19 came from a “laboratory leak in China.” The Center for Security Policy poll found that 49 percent believe that the virus “was developed in a lab.”

In the Politico-Harvard poll, 59 percent of Republicans, 52 percent of Democrats, and 47 percent of independents say that the virus came from a Chinese lab.

The Politico-Harvard poll also found that 82 percent of the public thinks it is “important” for the U.S. government to investigate the origins of the virus. 0f that 82 percent, 33 percent said it was “extremely important,” 29 percent called it “very important,” and 20 percent termed it “somewhat important.” That poll did not ask about reparations.

“The poll’s findings show what was once a fringe belief held mainly among some on the political right has become accepted by most Republicans, as well as most Democrats, amid heightened scrutiny of the lab leak theory,” according to Politico.

Center for Security Policy analysts have insisted from the beginning that the virus originated in a Chinese Communist Party-run virology lab in Wuhan, China, calling the plague the “Wuhan Virus.”

“Usually, our polls find a big split between Republicans and Democrats, so this is unique,” Robert Blendon, the Harvard professor of health policy and political analysis, told Politico. “More conservative media have been carrying the ‘lab leak’ issue, and it’s been a Trump talking point from the beginning, so we expected people who lean Democratic would say either ‘It’s not true’ or ‘I don’t know.’ But the belief is bipartisan.”

Even if the release was accidental, 63 percent of those surveyed in the Center’s poll said that China should be “required to compensate” Americans and other victims for the damage.

Here – and consistent with the Politico-Harvard poll pattern about a closing gap between the parties – 71 percent of Republicans and 61 percent of Democrats and independents in the Center for Security Policy poll say that China must pay reparations.

This shows that an absolute majority of the Americans polled agree with the Center’s position since the beginning that the Chinese Communist Party must pay for the international death and destruction that it caused.

Americans from the Midwest and South are most likely to suspect that the Chinese regime intentionally released the virus, though people in the more liberal Northeast are the most likely to call for reparations.

In every demographic group except young people age 18-24, more were “not sure” about reparations than were those who opposed reparations.

What if it was found that the Chinese Communist Party intentionally released the killer virus? In all, 78 percent of the public would want reparations. 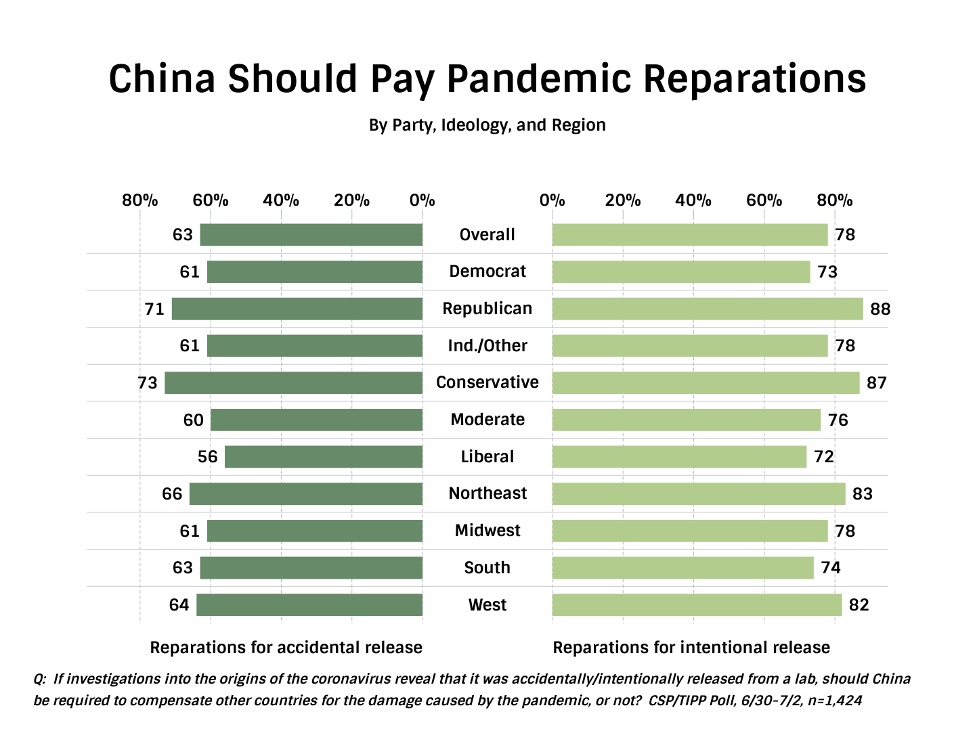 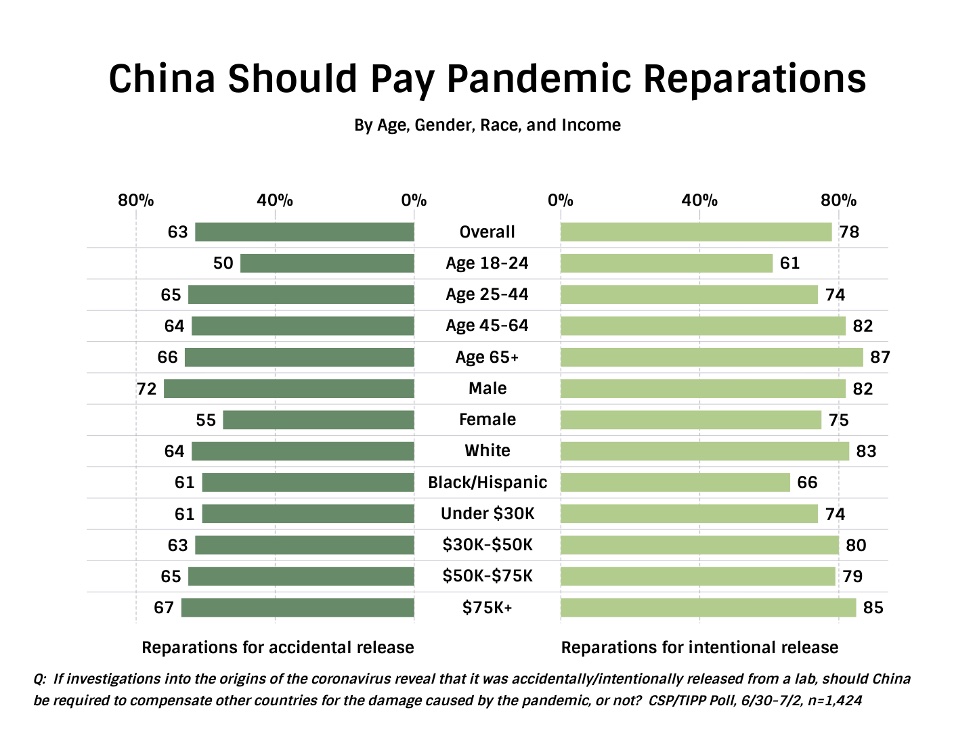 Reparations would have a two-fold positive effect: they would compensate American taxpayers and citizens for their personal and financial losses, and they would start the process of taking down the CCP.

In April 2020, the Center issued a Decision Brief titled, “Time to decide how Chinese Communist Party pays reparations for pandemic.”

The Center’s poll was conducted by TechnoMetrica, between June 30 and July 2, 2021, and the nationwide study had a sample of 1,424 Americans, 18 or older.  TechnoMetrica’s network of panel partners provided the study sample. Upon the study completion, TechnoMetrica weighted the study dataset by gender, age, race, education, and geographical region to mirror known benchmarks such as the U.S. Census. The credibility interval (CI) for the survey is +/- 2.8 percentage points, meaning the study is accurate to within ± 2.8 percentage points, 19 times out of 20, had all Americans been surveyed.