“As a nation, we cannot be under the thumb of another country for our energy needs,” Energy Secretary Jennifer Granholm announced at the most recent quarterly meeting of the Secretary of Energy Advisory Board (SEAB). “No country has ever been held hostage to access to the sun or wind, so as the world’s countries want to be secure, the clean energy transition is the greatest peace plan the world has ever seen,” she added, signaling the Administration’s stalwart commitment to the continual subsidization of wind and solar and continued opposition to tapping domestic fossil fuel capabilities.

Discussions of “environmental justice” dominated the meeting. According to the Department of Energy (DOE) environmental justice “is the fair treatment and meaningful involvement of all people, regardless of race, color, national origin, or income, with respect to the development, implementation, and enforcement of environmental laws, regulations, and policies.” The Department of Energy recently announced a “Justice-40 Initiative” stemming from a Biden Executive Order that 40% of overall benefits of certain Federal investments (such as clean energy and pollution reduction) be directed to “flow to disadvantaged communities (DACs).”

On the same day as the SEAB meeting, the Associated Press reported that the Biden Administration had launched “a $6 billion effort to rescue nuclear power plants at risk of closing” acknowledging the importance of nuclear power to the nation’s energy independence. In a statement to the AP, Granholm said, “we’re using every tool available to get this country powered by clean energy by 2035, and that includes prioritizing our existing nuclear fleet to allow for continued emissions-free electricity generation and economic stability for the communities leading this important work.”

Characterized by the AP as a “bailout,” the $6 billion program allows nuclear plant operators to bid on credits for financial assistance to keep operating, which has become more difficult with the availability of cheap natural gas and heavily subsidized wind and solar power generation. Many argue that the best solution would be to stop subsidies to all forms of electric generation and let free enterprise work – giving nuclear a level playing field. This, unfortunately, seems highly unlikely.

Since this “nuclear bailout” decision has already been made, Secretary Granholm may as well use it as a tool to help protect major cities and large population centers dependent on nuclear power –many considered disadvantaged communities (DACs)– from a potential environmental catastrophe which could arise in the event of a prolonged and widespread power outage

Nuclear plant operators need constant electric power (from the external electric grid) to maintain the safety systems to keep spent nuclear fuel cool, especially for the 40-foot-deep pools of circulating water where spent nuclear fuel cools for about 4-5 years after being used in a reactor.  If the external grid goes down and the backup diesel generators for those systems fail (generators with a requirement of only 7 days of fuel), the water boils off, fires and explosions can result, and a release of radioactive materials can contaminate large nearby areas –many in the vicinity of the very disadvantaged communities the Energy Secretary wants to protect.

Given these risks, a proposal was made during the SEAB meeting for the Secretary of Energy to

The NRC has been aware of the risks of spent nuclear fuel for decades and has been stalling for more than 11 years on a petition to fix the problem.

Secretary Granholm can spur industry and NRC action to fix this problem by using the recent “nuclear bailout.” She should mandate that any nuclear plant applying for financial assistance be required to apply a portion of the funds requested toward deploying these “High Reliability Unattended Backup Power” technologies to their spent nuclear fuel storage pools and to ensuring back-up access to auxiliary water ponds to replace water that has been boiled off during an emergency.

This would promote true “environmental justice” as it would help ensure no community, whether disadvantaged or affluent, suffers a nuclear environmental catastrophe.

It’s not just cities that are at risk from fires caused by spent nuclear fuel. Farms, food processing facilities and distribution centers are all infrastructures where radiological contamination can cause major problems for dependent population groups.  One concern is the fission product Cesium-137 which has a half-life of nearly 30 years, has been shown to be taken up in the ecosystem and can be transmitted to humans by inhalation and through the food chain.

The NRC found that if a spent fuel pool burns, the fire could release up to 100% of the Cesium-137 contained in the fuel into the environment. That’s more than the entire amount of Cesium-137 deposited by all atmospheric nuclear weapons tests ever conducted in the northern hemisphere. According to Stanford University, “regions sufficiently contaminated by Cesium-137 could remain dangerous to humans for a generation or more.” Because of this and other fission products potentially emitted in a reactor accident, emergency planners develop radiological response plans for areas surrounding nuclear power plants.

A good case study is the state of Louisiana, which has three nuclear power plants in its vicinity:  Grand Gulf, River Bend, and Waterford 3.   The Louisiana Department of Environmental Quality (DEQ), in conjunction with DOE emergency management assets, maintains the Radiological Emergency Planning and Response (REP&R) Program “to protect the health and safety of the public and environment in the event of a radiological incident” and produced the below graphic to show which communities could be most affected by a radiological accident. 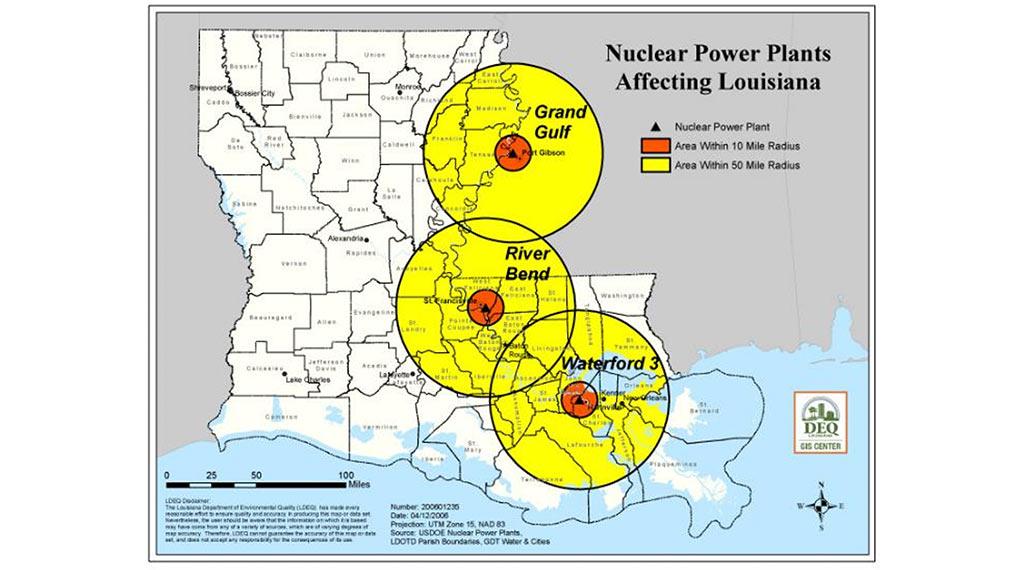 The map depicts a 10-mile radius around nuclear facilities called the “Plume Exposure Pathway” (where people can be directly exposed to radiation through inhalation and whole-body exposure during a passing plume” and a 50-mile radius called the “Ingestion Exposure Pathway” (where people are indirectly exposed through ingesting contaminated water or food such as milk and vegetables). Therefore, the LA DEQ  produces and routinely updates radiological emergency information for farmers, food processors, and distributors.

Within these two exposure pathways is a collection of ports with the largest throughput of goods in the world. The “Port of South Louisiana” receives 4,000 deep draft vessels and 55,000 barges annually and supports the refining of 1.374 million barrels of oil per day and the storage of 217 million barrels of oil. The entire New York, New Jersey and Washington DC Megapolis receives nearly all of its gasoline, diesel, and jet fuel from two pipelines (Colonial and Plantation) that pass through this same area. Less well-known is that this same port system is ranked as the single largest grain exporter in the United States, where 7 separate grain elevators store and ship grain to more than 90 countries. 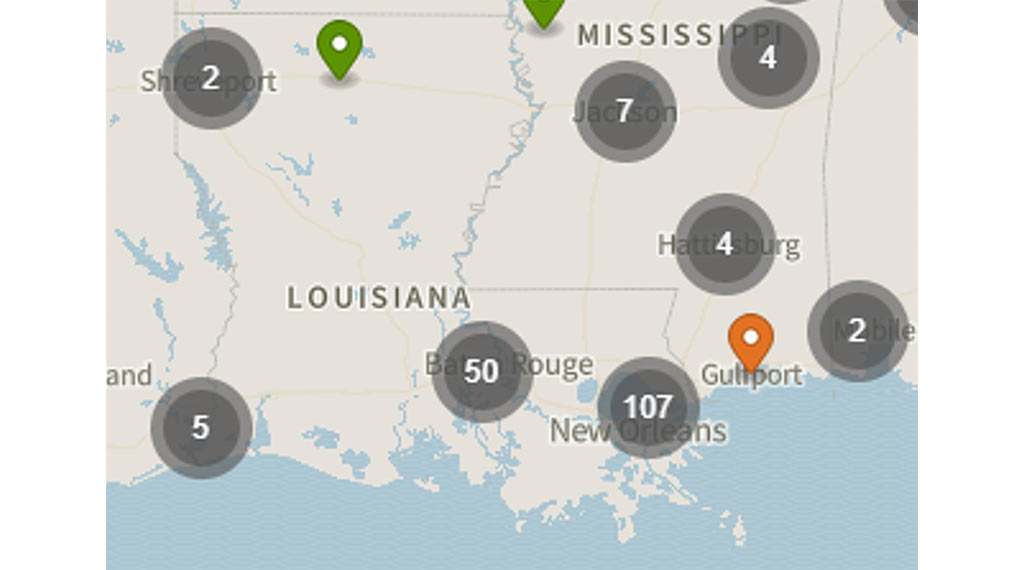 Although the chance of a spent nuclear fuel fire is unlikely and response times for mitigation are 5-7 days, this question is pertinent since consequences among the public could be dire: Is any of this DOE activity in Louisiana directed toward shoring up the safety systems for spent nuclear fuel?

If not, the Biden Administration has an opportunity to use the “nuclear bailout” to advance its energy independence agenda, promote its “clean” environmental policy, and establish genuine “environmental justice” for the residents of Louisiana and all other states which rely on nuclear power.