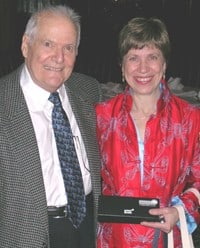 The Center for Security Policy congratulates Claudia Rosett for receiving the “Mightier Pen” award for her tireless work exposing the U.N. Oil-for-Food scandal and for her writing on issues of human rights and freedom.

“It is a great privilege to receive this award,” said Rosett.  “Among the many to whom I am grateful for their help, support and inspiration, I would like above all to thank the American troops and those of our allies who, in the war we are now fighting, have stepped up to the front lines, at risk of their lives, to defend the freedom to wield a pen.”

The Mightier Pen Award was established in 2001 in “recognition of individuals who have, through their published writings, contributed to the public’s appreciation of the need for robust U.S. national security policies and military strength as an indispensable ingredient in promoting international peace.” Previous recipients include William F. Buckley and Charles Krauthammer.

Claudia Rosett is Journalist-in-Residence with the Foundation for the Defense of Democracies.  She has written more than 50 investigative stories for various publications exposing the depth of the U.N. Oil-for-Food scandal.  Ms. Rosett also covered the Cedar Revolution in Lebanon, and writes frequently about the war on terrorism and the struggle for freedom.