As we reported Friday, the Islamic Society of Greater Chattanooga (ISGC) is tied to the Muslim Brotherhood through the Hamas-linked North American Islamic Trust (NAIT.) Now new evidence has been revealed showing that ISGC actually raised funds for the building of their new mosque in 2009, by referencing jihad and key Muslim Brotherhood figures. 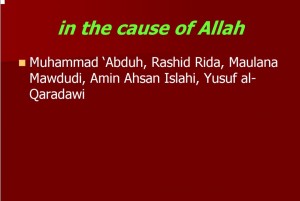 The title of the slide, “In the cause of Allah” is an English translation of Fi Sabil Allah, as in the phrase “Jihad Fisabilallah”, which means violent jihad against unbelievers. Classic Islamic law reference book, the Reliance of the Traveller, notes in its index, “Fisabilallah: See Jihad”. There is no other reasonable interpretation of the phrase in context.

The reference to jihad in the fundraiser related to the Mosque, was done as a means of explaining that a contribution to the building of the mosque qualified under “Zakat” (annual tithe which is obligatory in Islam), under the category of funding Jihad. 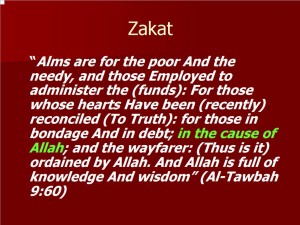 Reliance of the Traveller notes, “The seventh category is those fighting for Allah, meaning people engaged in Islamic military operations for whom no salary has been allotted in the army roster (O: but who are volunteers for jihad without remuneration)…”

The slide “Cause of Allah” references Yusuf Al Qaradawi, and S.A.A. Maududi, founder of Pakistani Islamist group Jamaat-e-Islami. Both Qaradawi and Maududi are prolific on the subject of Jihad.

Qaradawi has been noted for his avid support for the terrorist group Hamas and their jihad against Israel, including issuing fatwas authorizing suicide bombing, and has supported jihadist movements in Somalia, Sudan, Afghanistan, Syria, Libya and most recently in Egypt. Qaradawi is the leader of the Hamas financing network known as the “Union of the Good”, which utilizes Zakat funds received by its charities in order to support Hamas.

In his work, “Islamic Education and Hassan Al Banna,” Qaradawi discusses how it was the Muslim Brotherhood (Ikhwan) which revitalized the classical concept of Jihad for a modern age:

The aspect of Ikhwani training which makes it eminent and unique is Jehad or crusade i e. : Crusader·like training…The real implication of · Jehad (crusade) had been dismissed from Islamic training and way of life, before its conception among the lkhwans.

And in his “Priorities of the Movement in the Coming phase” Qaradawi says:

…it is a duty to defend every land invaded by infidels, stating that such jihad is imperative for Muslims in this land as an individual obligation and that all Muslims must support them with money, arms and men as required until all their land has been liberated from any aggressor who usurps it. Therefore, the Islamic Movement cannot stand idle and watch while any part of Muslim land is occupied by a foreign aggressor.

The other modern Islamic scholar referenced by the document, Maulana S.A.A. Maududi, was famous for successfully merging classical Islamic concepts of Jihad with a modernist language of revolution. He noted the following in his work “Jihad in Islam”:

It must be evident to you from this discussion that the objective of the Islamic ‘ Jihād’ is to eliminate the rule of an un-Islamic system and establish in its stead an Islamic system of state rule. Islam does not intend to confine this revolution to a single state or a few countries; the aim of Islam is to bring about a universal revolution. Although in the initial stages it is incumbent upon members of the party of Islam to carry out a revolution in the State system of the countries to which they belong, but their ultimate objective is no other than to effect a world revolution.

So the Islamic Society of Greater Chattanooga announced in 2009 that it openly aligned its views of Jihad with the views of Qaradawi and Maududi, and told its Muslim congregants that donating to the construction of ISGC was permissible, because it represented funding jihad.

Chattanooga shooter Mohammed Yusuf Abdulazeez and his family were regular attendees as ISGC. Despite claims by the mosque leadership that Abdulazeez was a rare attendee or little known there, a photo from a family Facebook account shows that Abdulazeez held his graduation party at the mosque, and that it was well attended, indicating they were well known regulars.

This fundraising document was publicly available information, three years before U.S. District Attorney William Killian attended the grand opening in 2012 and expressed his friendship with a mosque leadership who built their mosque with a promise that funding them represented an investment in jihad.

Now that investment appears to have matured.

U.S. District Attorney William Killian should recuse himself from this case, because of his association with ISGC, and the investigators must begin to conduct a detailed and through investigation of ISGC itself, and what role its support for violent jihad may have played in the attack in Chattanooga which claimed the lives of five servicemen.