Last week, Denmark eliminated the last obstacle to a new natural gas pipeline from Russia to Germany. Nord Stream 2 is the latest demonstration of Putin’s most effective foreign policy tool – using energy supplies as a weapon.

In 2006, shortly after the Orange Revolution brought a pro-Western regime to power in Ukraine, Russia shut off gas supply to Ukraine and demanded an price increase on gas of over 300 percent.

On January 1, 2009, Russia cut off all natural gas to Ukrainian pipelines, halting exports to 18 European countries, leaving thousands of homes without heat in the middle of winter. Moscow insisted on 50 percent price increases, only agreeing a reduction after Kiev signed a 25-year lease on the Crimean port of Sevastopol, home of Russia’s Black Sea fleet. Russian presence in Sevastopol aided Russian annexation of Crimea in 2014.

After the Crimea annexation, European countries tried to help Ukraine by reselling Russian gas to Ukrainians at a lower price. Putin cut daily flows to Ukraine and Germany by 50 percent in retaliation. Norway made up for the shortage, and Moscow never faced consequences.

Still, Europeans have learned nothing.

Russia is the largest provider of natural gas to the EU, the majority imported through Nord Stream 1, Belarusian pipelines and Ukrainian pipelines. Oil and gas production fund 40 percent of Russia’s budget.

Russian and Ukrainian officials are deadlocked in negotiations to renew a gas transit agreement set to end December 31st. Kiev is pushing for a long-term deal, but Moscow only wants a one-year agreement, allowing time to finish Nord Stream 2 with no further obligation.

Nord Stream 2 will allow Gazprom to shut down Ukrainian pipelines, which could reduce Ukrainian GDP by 3%.

Proponents of Nord Stream 2 claim it will double Russian exports to Europe. European gas production is expected to fall by 50% over the next 20 years, while demand will remain the same. 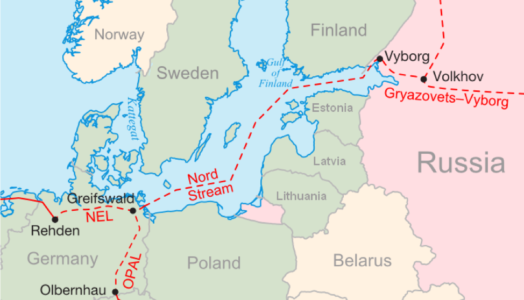 Map of the Nord Stream pipeline, completed in 2011. Nord Stream 2 will follow a nearly identical route.

Exports may rise initially, however, Gazprom plans to close Ukrainian pipelines after Nord Stream 2 is complete. Three Ukrainian compressor shops that provide pressure to move gas through pipelines have already been shutdown. Gazprom will close 2,600 miles of pipeline and 62 additional compressor shops. Russian natural gas will then only flow to Europe through Germany, and total exports will be down by 85 billion cubic meters annually.

Nord Stream 2 closely parallels Nord Stream 1, and both draw from the same source. Far from increasing energy security, having two pipelines along the same path means a natural disaster could disrupt supply. Ukrainian pipelines are the only routes with spare capacity, which is important for backup when Nord Stream stops for maintenance. Nord Stream 2 is incapable of the same due to its much smaller capacity.

Germany will now be vulnerable to massive price hikes and disruption in supply if not sufficiently in line with Moscow.

Merkel has disregarded warnings from Washington, vaguely stating Ukrainian pipelines must continue, but taking no action to insure it. A German official told the WSJ that they would do “anything it takes to complete this pipeline.”

President Trump threatened to withdraw protection – 34,000 U.S. troops are currently stationed in Germany –if Nord Stream 2 was completed. The U.S. House and Senate have passed bipartisan bills imposing sanctions on the pipeline.

If Moscow shuts off gas supply one winter will Germany, as a NATO member, be any more capable of fighting price hikes or political demands than Ukraine was? Freezing citizens and irate businessmen will likely motivate German politicians to cede whatever necessary to turn heat back on. NATO military strength will be entirely irrelevant.