Violent demonstrations protesting Donald J. Trump’s 20 January 2017 inauguration as 45th President of the United States erupted in Washington, DC and continued throughout the country over the subsequent weekend. Cities became staging grounds for a ‘Red-Green Axis’ of groups, including the Muslim Brotherhood in America, Black Lives Matter movement, and a motley collection of anarchists, communists, and progressives whose sole unifying objective is to bring down the U.S. government. This assembly of forces coalesced on the 2016 campaign trail but now vows to continue disruptive actions. A weekend of lawless destruction, looting, and attempts to block transportation routes and deny access to emergency facilities provided a look ahead at the groups’ real agenda, which is societal chaos aimed at tearing down the U.S. system of law and order.

It’s unlikely that most of those who took to the streets for the “Women’s March on Chicago” even vaguely understood the combined threat of the Red-Green Axis. Top organizers, though, knew enough to reach out to nationally-recognized Muslim Brotherhood leader, Tahera Ahmad, who was invited to close their program with the adhan, or Islamic call to prayer (which, according to Muhammad’s example, must precede violent jihad). It is thus both an invitation and a lethal warning for all non-Muslims who hear it. While some might wonder at the choice of Ahmad, whose Islamic Movement connections identify her as shariah-adherent to a doctrine that is distinctly anti-woman, downtown Chicago is known as a stronghold for Muslim Brotherhood front organizations and a place where leftist and antisemitic demonstrations are now routine occurrences.

Tahera Ahmad leading the adhan (or Islamic call to prayer)

At the webpage of Northwestern University, where Ahmad is Associate Chaplain and Director of Interfaith Engagement, she openly lists her Muslim Brotherhood credentials, including the Islamic Society of North America (ISNA), founded by prominent Brotherhood members, according to the Department of Justice. In the 2008 Holy Land Foundation HAMAS terror funding trial, federal prosecutors included ISNA on a list of unindicted co-conspirators. Educated at al-Azhar University in Cairo, Egypt (the leading institute of Sunni Islamic scholarship worldwide), Tahera Ahmad became the first woman to recite the Quran in front of a mixed-gender audience at the 50th annual ISNA convention held on 30 Aug 2013 in Washington, DC. Ahmad also shares in her bio that she has “supported leadership for premier Muslim organizations including [ISNA]”.

Tehera Ahmad is a friend of Suhaib Webb, who’s now leading Center DC in the nation’s capital but formerly was Imam of the Islamic Society of Boston, which operates “the mosque attended by Boston Marathon bombers Dzhokhar and Tamerlan Tsarnaev, and a plethora of other convicted terrorists.” Prior to the 9/11 attacks, Webb was close to al-Qa’eda cleric/recruiter Anwar al-Awlaki. Webb’s history of jihadist connections alone should raise questions about who Ahmad really is. In this video, Webb shared what Islamic Law states about the LGBTQIA community. 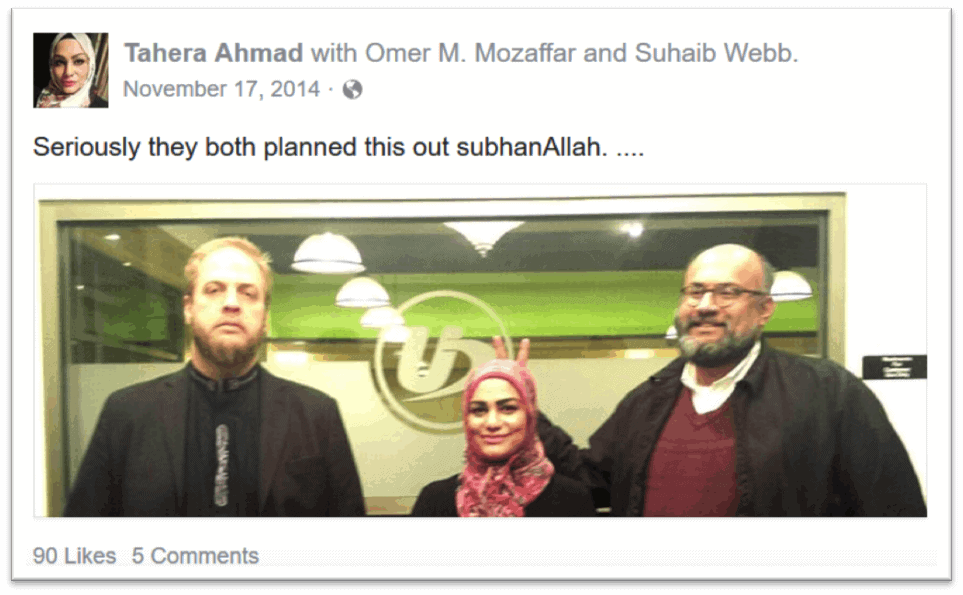 HAMAS dba CAIR (Council on American Islamic Relations, HLF unindicted co-conspirator) recognizes Ahmad’s leadership role. She also gained the attention of Yasir Qadhi (Dean of Academic Affairs at Al-Maghrib Institute and Islamic studies teacher at Rhodes College, Memphis, TN), who has “nothing but the highest regards for her and her work” and helped her to spread the Brotherhood’s Civilization Jihad at Northwestern University.

Consider for a moment Ahmad’s connection to Yasir Qadhi and what its Star Spangled Shariah implications mean for non-Muslims in the U.S.

The relationship between Tahera Ahmad and Yasir Qadhi is important to understand in the context of the Brotherhood’s global jihad to impose shariah. Likewise is the connection between Qadhi and Tariq Ramadan, grandson of Muslim Brotherhood founder Hassan al-Banna and himself no stranger to the ‘Civilization-Jihadist Process’ set in motion by the Muslim Brotherhood through the U.S. Council of Muslim Organizations. Ramadan and Qadhi are collaborators for a book project that started in 2016: Call for Chapters: Islam and Applied Ethics.

In the end, what is so troubling about the ostensible ‘Women’s Rights March’ participants is their mindless alignment with figures like Ahmad, who makes no attempt to hide her allegiance to a fundamentally misogynist legal system called shariah—but won’t ever describe it truthfully, either. Unfortunately for women and any of the LGBTQIA community who have the misfortune to live under Islamic Law, shariah’s barbaric death penalty and flogging for non-sanctioned sexual relations, unequal treatment of men and women, and Qur’anic injunctions that permit marital rape, polygamy, underage forced marriage, and wife-beating, are the antithesis of feminism and protection of women’s dignity and rights.

Americans must not only be able to identify those individuals leading street protests and violence, but understand what they represent: a direct challenge to our Constitutional rights. This weekend was never about a “Women’s March on Chicago.” Whether the marchers knew it or not, it represented instead the focused agenda of the Red-Green Axis in true Alinsky form. And that the Muslim Brotherhood aligns with and uses the Red-Green Axis demonstrates the genuine aims of jihadis in suits: undermining the U.S. Constitution and national security through the global Islamic Movement.

Protesters at Women’s March on Chicago

Protesters at Women’s March on Chicago