A new CSP/TIPP poll conducted in early February of 1,355 Americans found that 71 percent are concerned about the reported buildup of Russia’s troops along Ukraine’s border.

The CSP/TIPP Poll asked Americans, “How concerned are you about Russia’s troop buildup along Ukraine’s border?”

The poll showed that 32% are “very concerned,” and another 39% “somewhat concerned.” The results suggest a bipartisan consensus on this topic, with over three-fourths of Republicans (77%) and Democrats (76%) recording concern. 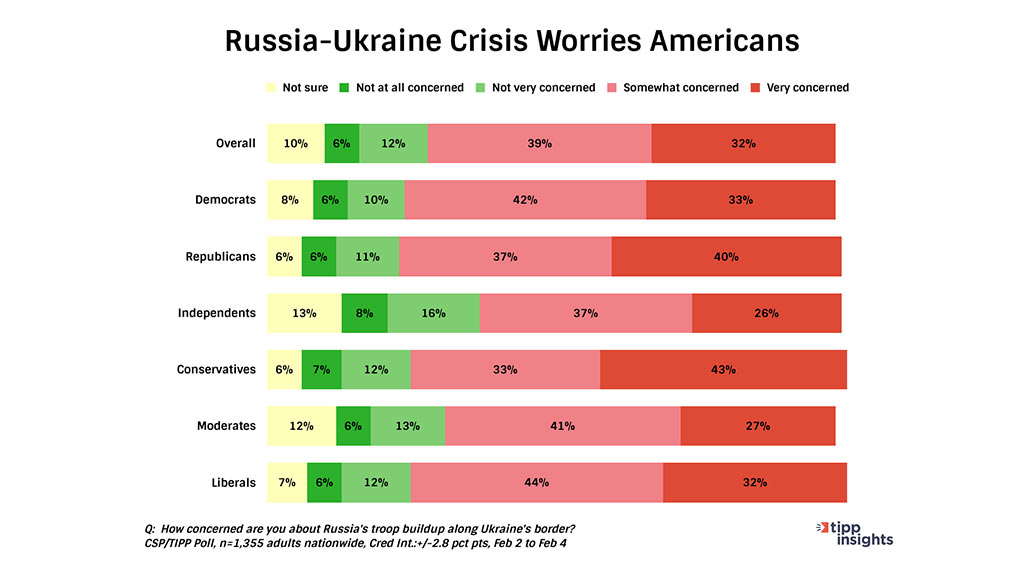 Russian President Vladimir Putin has reportedly amassed more than 100,000 troops along Ukraine’s eastern and southern borders, indicating a potential seizure of territory. Escalations in the Russia-Ukraine conflict that occurred over the same time the poll was conducted could contribute to the results. Between February 2-February 4, the Biden administration accused Moscow of planning a staged attack in Russia to justify an invasion of its neighbor, and the U.S. committed 3,000 troops to assist its European allies in the border standoff.

While the U.S. administration has taken the lead in negotiations to defuse tensions on the Russia-Ukraine border, the actions of some European leaders have created stumbling blocks. French President Emmanuel Macron’s comments that Russian security concerns are “legitimate” and German attempts to keep the yet-to-be-commissioned Nord Stream 2 pipeline off the sanctions list point to a divided house. The recent summit between the Russian President and his Chinese counterpart President Xi Jinping also ups the ante.

The poll revealed that the volatility of global events in the last year had impacted some Americans’ perspectives concerning worldwide stability. When asked the question, “Generally speaking, since President Biden took office, is the world more stable, less stable, or has there been no significant change?”

Almost half of those surveyed expressed heightened concern about stability around the world. Forty-eight percent believed the world is less stable since Biden took office, 23 percent said it is more stable, and 24 percent said there had been no significant change. Depending on party affiliation, respondents recorded a greater variation in their responses. While 44 percent of Democrats recorded a sense of greater stability during the Biden presidency, 82 percent of Republicans were of the opposite view. 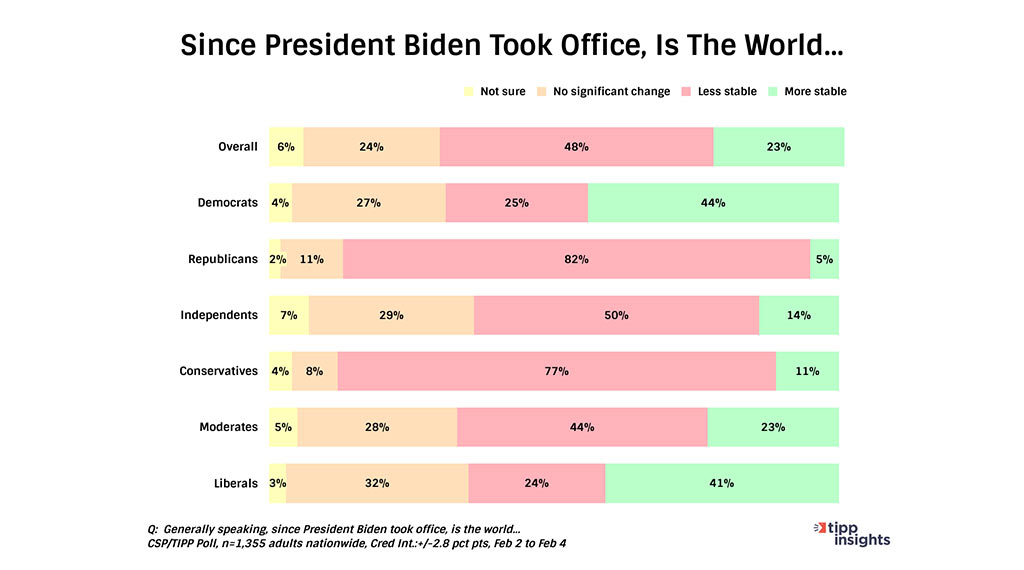 Since President Biden took office, the world has witnessed a series of catastrophic events. An eruption of violence in the Middle East took center stage in 2021, including an intense flare-up in the Hamas-Israel conflict, a bungled and embarrassing withdrawal from Afghanistan (which led to the deaths of 13 U.S. service members), and an escalation of attacks carried out by Iranian-backed militias throughout the region. In the Pacific, Chinese acts of aggression toward the island of Taiwan have steadily increased, moving up the timeline for a possible kinetic conflict that would likely involve America. The ongoing Iran Nuclear Deal revival negotiations have also not made much headway.

Perhaps unsurprisingly, Republicans seem to hold President Biden more responsible for some of these events than Democrats do.

All the events mentioned above have eroded Americans’ confidence in President Biden’s foreign policy and created an air of unease. A TIPP Poll conducted in January 2022 revealed that many believe that America’s standing in the world has dropped since the President took office.