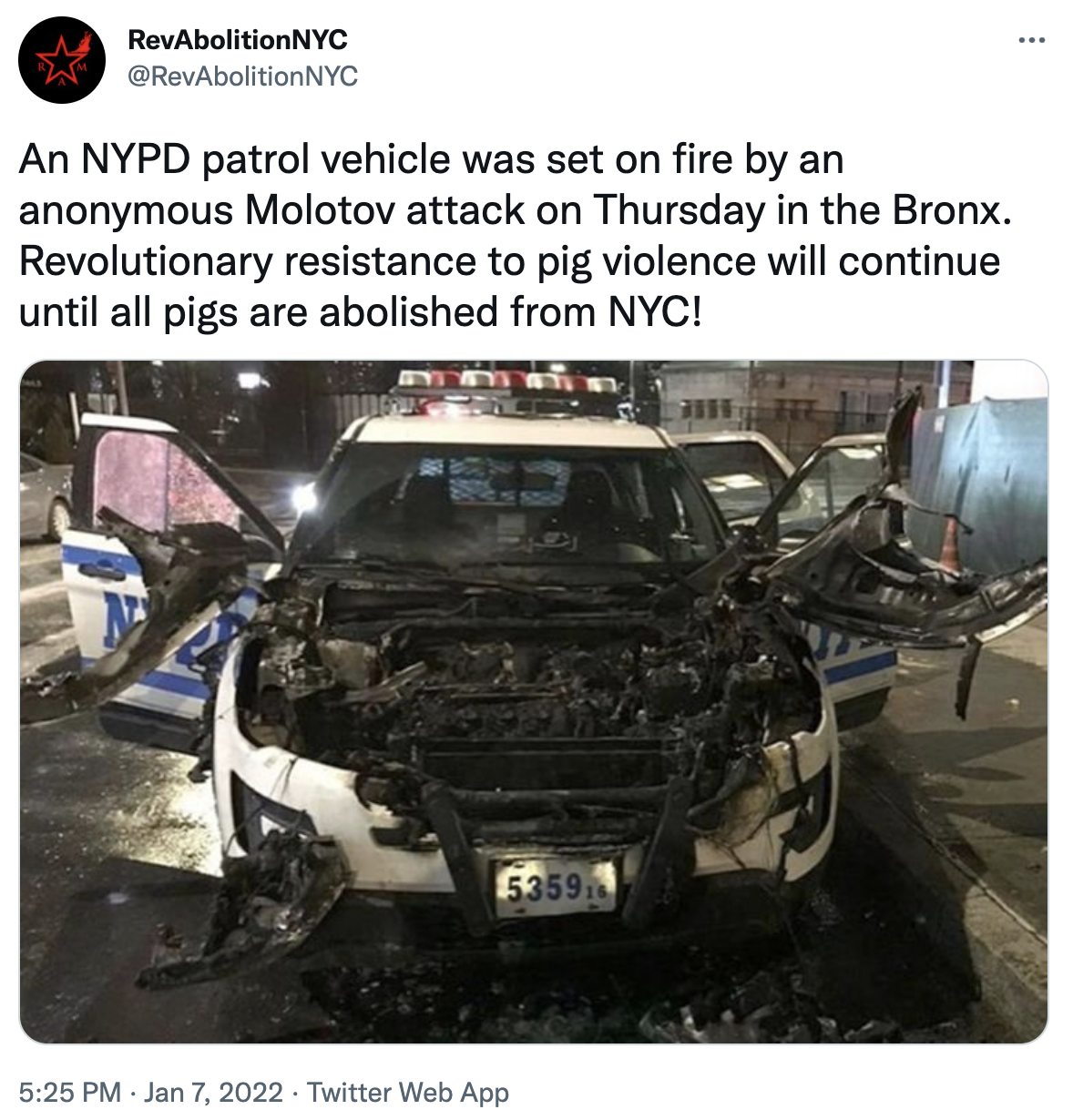 On January 6th, 2022, the New York Police Department (NYPD) reported that one of its police cruisers was incinerated in a Molotov cocktail attack in the Bronx near the Pelham Bay Park subway station, while officers were responding to a of a public disturbance involving an emotional disturbed person on the platform.

The attack was publicized by the Revolutionary Abolitionist Movement (RAM)’s New York City chapter, although the group subsequently denied responsibility for the attack.

The targeted arson of law enforcement and security vehicles is suggestive of a potential trend, as the Center for Security Policy noted in a May 2021 situation report regarding an alleged attack on a fleet of vans owned by defense contractor Pratt & Whitney:

“The attack on the fleet of vehicles falls within a growing modus operandi of attacks against parked vehicles both in the United States and abroad. In March, federal ICE and CBP vehicles were vandalized outside a Philadelphia parking garage.  In April, a New York police officer’s unmarked car was set on fire. In May, multiple police vehicles were reportedly vandalized inside an Oakland Police Precinct.”

One issue of concern regarding this incident is the speed with which the attack occurred. Since the officers were responding to an active call, the perpetrator(s) needed to identify the vehicle, acquire, or already possess, the Molotov cocktail and then deploy it while being confident that law enforcement would not return in time to intervene.

While it is possible that the police cruiser represented a target of opportunity and the perpetrator(s) came upon it with the Molotov cocktail already in his or her possession, another scenario is that that the perpetrator(s) were monitoring police scanners to identify the arrival of the unit in the area, produced the Molotov cocktail and then surveilled the area until he or she identified the police cruiser.

A third and potentially more worrisome scenario would be the presence of a far-left militant occupied site or squat in the general vicinity of the incident, where Molotov cocktails are being produced and/or stored for future use. Such “Molotov cocktail factories” are a feature among some European far-left militants, where whole city blocks or neighborhoods may be occupied by groups of militants. The creation and occupation of such “autonomous zones,” and efforts to drive out or up the cost of police presence, is common to autonomist groups whose modus operandi includes targeting police and security vehicles in this manner.

Law enforcement intelligence should consider, where regulations permit, carefully plotting the location and frequency of targeted arson attacks and similar incidents as well as conducting regular assessments of graffiti for the presence of anarchist or antifa symbology (similar to the way a gang unit might track graffiti in neighborhoods with a suspected gang presence) in order to determine the potential presence of this kind of autonomous zone, militant safehouse, or squat.

In April 2021, NYPD arrested 44-year-old Lionel Virgile after he allegedly attacked a police officer with a cup filled with bleach during a traffic stop in Brooklyn. After a car chase, Virgile’s vehicle was found to contain numerous Molotov cocktails, which he reportedly intended to use against police.

In May of 2020, two lawyers, Urooj Rahman and Colinford Mattis, plead guilty of targeting NYPD police vehicles with Molotov cocktails, as well as distributing the weapons to others during on-going George Floyd protests in the city.

The Revolutionary Abolitionist Movement is a group of self-identified “revolutionary anarchists” who seek the immediate end of policing and incarceration, which they view as equivalent to modern-day slavery, promote the establishment of an “autonomous territory” modeled on the Kurdish “Rojava” in Northern Syria, and encourage “burning down the American planation”. RAM chapters exist in several U.S. cities, and the group offers the “Kuwasi Balagoon Liberation School,” which provides courses on anarchist militancy, and implies it can provide the opportunity to acquire paramilitary skills by training with Kurdish forces. Kuwasi Balagoon is the nom de guerre of Donald Weems, a convicted Black Liberation Army (BLA) member who died in prison during a lifetime sentence for his role in the 1981 Brinks armed car robbery, and murder of two police officers and a security guard.

RAM openly associates itself with the historical Black Liberation Army, a Black Panther offshoot which was responsible for the target assassination of multiple New York police officers as well as armed robberies in the 1970s and early 1980s.  The rising resurgence of BLA rhetoric has reportedly worried NYPD police representatives.