The Muslim American Society (MAS) and Islamic Circle of North America (ICNA) just concluded their 13th annual convention held at the McCormick Center in President Barack Obama’s hometown of Chicago from 25-28 December 2014. Notable among the scheduled contributors at this gathering of high level international and national leadership representing the jihadist Muslim Brotherhood was keynote speaker U.S. Congressman André Carson, a Democrat from Indiana’s 7th District. The presence at this convention of an elected U.S. lawmaker who has received financial donations from Muslim Brotherhood-affiliated organizations ever since he was first elected to the House of Representatives in a special election in early 2008 must be a matter of serious concern.

Controversy surrounds the appearance of Congressman Carson at the MAS-ICNA 2014 Convention in Chicago where he was a scheduled panelist together with Mazen Mokhtar, National Executive Director for the Muslim American Society, which was founded as the U.S. branch of the Muslim Brotherhood. Worse yet, according to the testimony of federal agents in federal courts, MAS National Executive Director Mokhtar facilitated operations for running an Al-Qa’eda website responsible for raising funds for the Taliban. In March 2014, MAS was just one of several Muslim Brotherhood-affiliates that joined together to establish the U.S. Council of Muslim Organizations (USCMO), the first U.S. political party openly founded by members of the North American Brotherhood network.

At the December 2014 MAS-ICNA Convention, Carson and Mokhtar were scheduled to speak on a panel addressing “Ferguson Is Our Issue: We Can’t Breathe.” The following picture is from the actual program of the MAS-ICNA 2014 Convention issued to attendees, which clearly shows that Congressman Carson was scheduled to appear on a panel 26 December 2014 with Mazen Mokhtar, the executive director of USCMO member MAS National. (The program date is printed erroneously, as the last Saturday in December 2014 was the 27th, not the 26th). Nevertheless, Carson’s later official statement that he didn’t even find out about this panel until sometime on Sunday 28 December seems questionable.

Prior to his scheduled appearance on this panel for Saturday evening, Congressman Carson did make an appearance as scheduled as the keynote speaker for the 13th Annual MAS-ICNA Convention Appreciation Dinner—after which he seems to have disappeared, with no comment from the Convention organizers about the empty seat at the Ferguson panel. The following picture is a screenshot from the MAS-ICNA 2014 convention website providing details for his appearance. 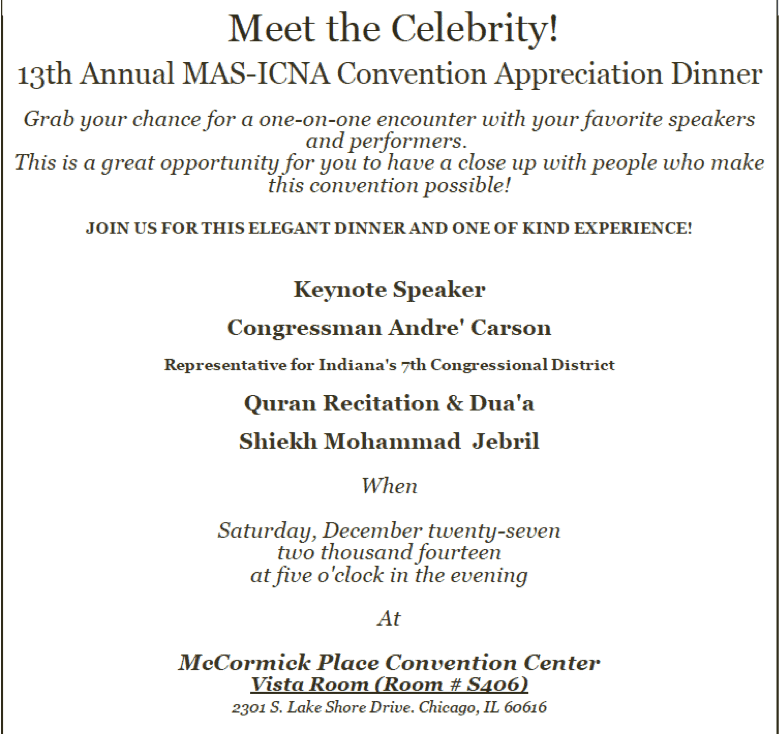 There’s no question the Congressman was present at the Convention Center on the date in question. The following images are from Muslim Brotherhood leader Sabri Samirah’s organization UMMA and UMMA Board of Trustee member Darwish Mabruk’s Facebook pages, showing photos taken during the MAS-ICNA convention where Congressman Carson is pictured meeting with various Muslim Brotherhood leadership figures, apparently just prior to the dinner.

Later, as the back-pedaling began, Congressman Carson issued a press statement on 31 December 2014 as shown in the screenshot below from his official Twitter account. In both the press statement and Tweet, however, he strangely neglected to mention the Muslim American Society, which was the co-sponsor of the MAS-ICNA Convention chaired by Hussein Ata (president, Mosque Foundation in Bridgeview, Illinois, where USCMO Secretary General Oussama Jammal is a past president and current Chairman of MAS-PACE). 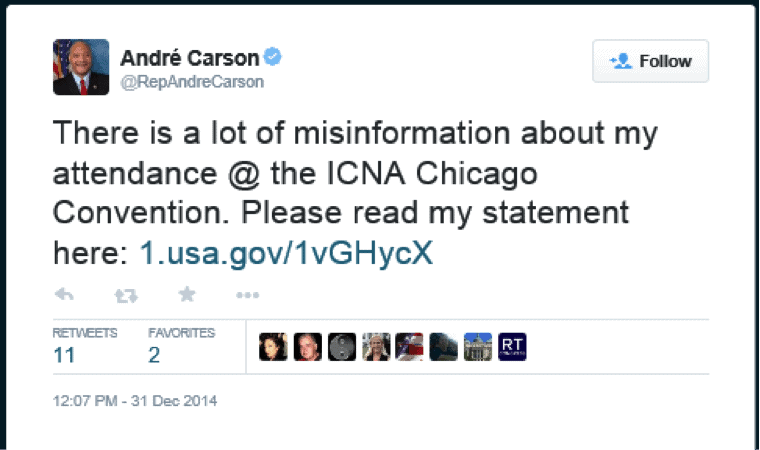 In Carson’s statement that appears on his Congressional website, the following message was delivered to his constituency on 31 December 2014:

The absence of the Muslim American Society’s name in Congressman Carson’s press statement and Tweet is peculiar. It’s not as though he’d avoided associating with MAS in the past—but of course, that was before the United Arab Emirates (UAE) listed MAS as a terrorist organization, as Patrick Poole noted here. But it’s also not the first time Carson has attempted to conceal details of such problematic associations. In June 2014, Congressman Carson was featured as a keynote speaker for the USCMO’s inaugural banquet, an event shrouded in secrecy with no transcripts, audio, or video having been released, as would usually be customary. Both Congressman Carson and Congressman Keith Ellison (Democrat, MN-5th District) were invited by USCMO Secretary General Oussama Jammal to speak at the U.S. Muslim Brotherhood political party’s event on 10 June 2014 at the Hilton Crystal City Hotel near Washington, D.C. To date, their respective congressional offices have refused to make publicly available either the text or video of the remarks delivered by Carson and Ellison at this high level Muslim Brotherhood function, held at a time when the Obama administration’s foreign policy supporting Brotherhood revolutions in Egypt, Libya, and Syria was collapsing in failure.

So, perhaps the Congressmen’s reticence might have something to do with the all-star Muslim Brotherhood line-up that attended that banquet, a couple of which groups, as noted above, were named in November 2014 by the UAE to its new terrorist organizations list (on that list are both CAIR and MAS, along with the Muslim Brotherhood itself.). As reported by the Muslim Link Paper for this historic Muslim Brotherhood leadership gathering, others in the speaker line-up included Dr. Ousama Jammal, Secretary General, USCMO; Dr. Osama Abu-Irshaid, Board Member, American Muslims for Palestine; Nihad Awad, National Executive Director, Council on American Islamic Relations (CAIR); Naeem Baig, President, Islamic Circle of North America (ICNA); Mazen Mokhtar, Executive Director, Muslim American Society (MAS); Khalil Meek, Executive Director, Muslim Legal Fund of America; Imam Delawar Hussein, Dr Lynne Muhammad, Founder, Making A Difference Through Discoveries, American Islamic College, Whitney Young Magnet High School; and W.D. Mohammed II, President, Mosque Cares.

Nor was the December 2014 MAS-ICNA Convention Carson’s first appearance at the annual event. Two years prior to the June 2014 USCMO event launching the first ever U.S. Muslim Brotherhood political party, Congressman Carson participated at the MAS-ICNA summer 2012 convention. Striking a somewhat exaggerated tone of aggrieved victimhood, he told the gathering that “America must understand that she needs Muslims. There are over 7 million Muslims in this country. While we are under attack, we cannot retreat. We have been a part of America since the inception of America…” Congressman Carson continued, “Now, it is unfortunate that there are those who are thinking at this convention right now, we are having secret meetings that we are plotting to destroy this country. But I say to those who are here undercover, Allah will not allow you to stop us.”

Despite his attempt at projecting a patriotic image, though, Congressman Carson’s congressional voting record on national security issues demonstrates a rather different profile. On 15 October 2014, the Center for Security Policy released its 11th annual 2013-2014 Congressional National Security Scorecard for the 113th Congress. The Center scored a total of 27 votes in the U.S. House of Representatives, and 15 votes in the U.S. Senate on issues related to national security.  Topics covered included nuclear deterrence, terrorist detainee policy, border security, Russia, Egypt, Afghanistan, Iraq and funding to Syrian rebel groups. The national security scorecard scores all Representatives and Senators on key national security votes in their respective chambers over the past two years. And while Congressman Carson claims “As a former law enforcement officer with the Indiana Department of Homeland Security in the anti-terrorism unit, it is critical that Americans know that I would never associate with any individual or organization trying to harm the United States of America or its citizens,” he achieved only an extremely low 11% on the CSP Congressional scorecard.

Making matters even more serious for Congressman Carson, he has in fact been taking money from a number of self-identified Muslim Brotherhood front groups, including some that are members of the U.S. Muslim Brotherhood political party (the USCMO). The following table includes political donations, as reported from 26 January 2008 through 30 June 2014 by the Federal Election Commission. In this chart, the “Confidence” level refers to the Islamist Watch certainty about names, name spellings, and correct identities.

Total amount of donations listed above: $33,911

It seems that André Carson wants to have it both ways: consort with the Brotherhood, take political donations from Brotherhood front groups, enjoy VIP status at Brotherhood events—and then try to cover his tracks by withholding transcripts and videos, issuing questionable media statements, and remaining mute as social media entries and other websites are scrubbed of information that might link him to events and groups and individuals now perhaps seen as too dubious even for André Carson.