United States Council of Muslim Organizations founding member American Muslims for Palestine (AMP) has a history of antisemitic and anti-American demonstrations held in cities across the nation. Now, AMP is once again combining forces with others of the Red-Green Axis: this time to target Christians and Jews who will gather for the annual Christians United for Israel (CUFI) conference to be held on Sunday – Monday, 7-8 July 2019 in Washington, D.C.

In the event described as “Rise against Racism: Counter CUFI” on the website of Friends of Sabeel North America (FOSNA), AMP is a signatory alongside FOSNA, Jewish Voice for Peace, and the U.S. Campaign for Palestinian Rights. The page also includes a recognizable list of Red-Green Axis member endorsements to be led by Council on American Islamic Relations (CAIR)-backed antisemitic activist Linda Sarsour. Of significant note, USCMO members have pledged their fidelity to global Islamic Movement jihadist leader Turkish President Recep Tayyip Erdoğan and his Justice and Development Party (AK Party), while refusing to recognize Jerusalem as the capital of Israel.

In its very defiant “Rise against Racism: Counter CUFI” declaration statement, FOSNA conflates a false narrative with disinformation, while attacking official policy of the United States government and the administration of President Donald J. Trump and Christians United for Israel. Concern is warranted for the safety of both the general public and CUFI conference attendees in Washington, D.C., as AMP National Director Osama Abu-Irshaid is working with Red-Green Axis members, including Code Pink, on logistical planning which specifically references ‘civil disobedience’. AMP National Director Osama Abu-Irshaid has spent time in both Turkey and the United States working with Erdoğan and AK Party leadership; the Turkish regime under Erdoğan has an identifiable pattern of using threats and violence against its opponents, both domestic and abroad. 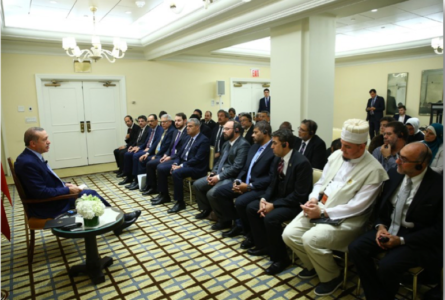 According to an entry dated 18 June 2019 on the Facebook page for FOSNA, the group states that “over 500 people from hundreds of organizations” have already endorsed its call to action. 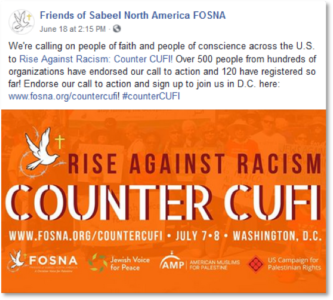 In a Google document obtained from Friends of Sabeel North America, the following question about civil disobedience is asked of potential participants as shown in this screenshot: 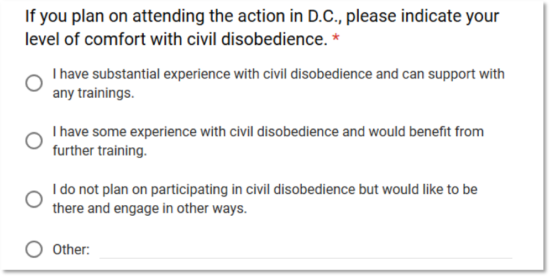 Additionally, information learned from the FOSNA Google document reveals that “Rise against Racism: Counter CUFI” leadership is preparing for an additional day of action on Capitol Hill as shown in the following screenshot:

As just announced by FOSNA’s Facebook page on 20 June 2019, “We’re excited to announce that Linda Sarsour, Lesley Williams, Lara Kiswani, and Rev. Neichelle R. Guidry, PhD will be joining us at our upcoming action Rise Against Racism: Counter CUFI! We’ll be discussing how we can challenge Christian Zionism while upholding our collective vision of liberation and justice for all. Join us and check out the full program: www.fosna.org/countercufi. #counterCUFI” That this event includes Linda Sarsour, known for her antisemitic statements and fully backed by the Council on American Islamic Relations (CAIR) and its executive director Nihad Awad, indicates that a large gathering of demonstrators to protest CUFI likely will assemble and attempt to send a strong message to the Trump administration opposing its steadfast support of Israel.

For many years now, the Center for Security Policy (CSP), including in its September 2015 published book “Star Spangled Shariah: The Rise of America’s First Muslim Brotherhood Political Party”, has consistently warned that the USCMO and its members pose a clear and compelling threat to U.S. national security and the U.S. Constitution. Evidence acquired by American and foreign security agencies documents that the Muslim Brotherhood engages in hostile intelligence collection against U.S. law enforcement and intelligence agencies, and seeks to conduct influence operations (IO) against them and American policymakers. It would appear the intentions of USCMO founding member AMP are to counter U.S. government policy on Israel by sending “Rise against Racism: Counter CUFI” protestors with misleading talking points to meet with members of U.S. Congress and their staffers on Tuesday, 9 July 2019.

As previously demonstrated by the Center in its occasional paper “The Domestic Insurgency of the Islamic Movement”, published on 17 May 2019, the jihadist enemies of the Islamic Movement, dedicated to replacement of the U.S. Constitution with shariah and represented by the Erdoğan regime, the Muslim Brotherhood, and the USCMO, are waging civilization jihad against us here in the homeland. While Islamic Movement leaders prepare to converge with the Red-Green Axis in a few weeks to demonstrate with the potential for using civil disobedience and/or violence at a peaceful gathering of Christians and Jews in Washington, D.C., the true colors of the USCMO are revealed as one of its founding members AMP represents a leading edge of this civilization jihad leveraging the resources of the Red-Green Axis to run hostile lines of influence operations against the U.S. government.

Interestingly, at this time AMP has no mention of plans for the “Rise against Racism: Counter CUFI” on either its official website or official Facebook and Twitter social media accounts. Will Islamic Movement operatives Representatives Ilhan Omar (MN-D) and Rashida Tlaib (MI-D) join in solidarity with faithful shariah-compliant Muslims and Red-Green Axis demonstrators in their planned protests against the U.S. government and CUFI in the beginning of July 2019?