LAWFARE AGAINST AMERICA – AND HOW IT CAN BE FOUGHT

In Offensive and Defensive Lawfare: Fighting Civilization Jihad in America’s Courts, David Yerushalmi, Esq., Director of the American Freedom Law Center (AFLC) and General Counsel for the Center for Security Policy, and AFLC co-founder Robert J. Muise, Esq. describe the use by our Islamic supremacist enemies of U.S. jurisprudence to compel submission to the doctrine they call shariah. As with so many other facets of the Muslim Brotherhood’s stealthy, pre-violent jihad against this country, most of us are unaware that such lawfare is taking place, let alone with such deleterious effects.

Even more importantly, Messrs. Yerushalmi and Muise lay out their recommendations for an offensive strategy to defend the U.S. Constitution and the rights it guarantees our countrymen and women from any further encroachment by Islamic law. 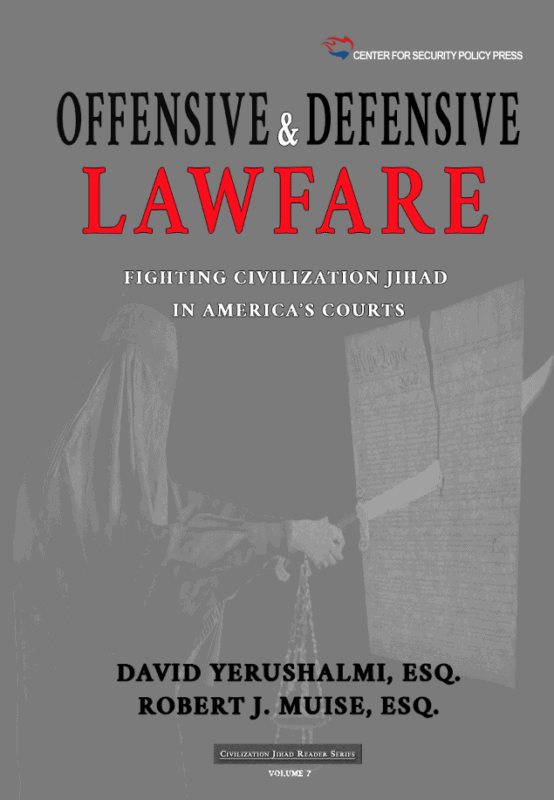 In stark contrast to the longstanding use of such techniques to intimidate or suppress freedom-loving peoples, offensive lawfare against the Brotherhood and its ilk is a relatively nascent area of the law, in which the authors are true pioneers and formidable innovators.

Center for Security Policy President Frank J. Gaffney, Jr. said on the occasion of the publication of the latest monograph in the Center’s Civilization Jihad Reader Series:

“In Offensive and Defensive Lawfare, David Yerushalmi and Robert Muise, have added to the great service they perform for the nation every day through their public interest law firm’s pro bono representation of exponents of religious and other freedoms. We hope that this treatment of their battlespace – with its clear depiction of the Islamic supremacists’ lawfare and insights into how this front of the civilization jihad can best be countered – will inspire many other accomplished litigators to join the authors in this fight.”

The Center for Security Policy/Secure Freedom is proud to present this monograph as a superb addition to its Civilization Jihad Reader Series .